(Commissioned by Beelzeboobs. Any resemblance to fictional persons, living or frozen, is purely coincidental.)

At first, Cloud hated Aeris' idea of dressing up as a girl to infiltrate Don Cornero's palace to rescue Tifa, but for the sake of his friend, he persisted. It wasn't until after they found Tifa and he was sent to the waiting room while Cornero inspected Tifa and Aeris when he noticed all of Cornero's muscular henchmen gazing at him. He could see their monster cocks practically busting out of their pants when looking at his feminine figure and getting a whiff of the perfume her had put on.

The henchmen couldn't take it anymore, they started to advance on Cloud. Cloud thought about putting up a fight, but didn't want to blow Aeris and Tifa's cover. One henchman said "I don't think the Don'll mind if we test this girl out before inspection!" another Henchmen said "Hell, its been forever since he had any fresh meat come through here, we have to savor this one, boys!" Before Cloud could say anything, one burly henchman pulled his dress off; Cloud's cock wasn't immediately noticable as Aeris showed him how to tuck it before entering Don Cornero's.

Cloud gasped if only for seconds before one of the henchmen rammed his thick meat into his mouth, "Oh ho, her mouth is ready, boys!" After being assaulted on both ends, Cloud was trying to think of a way out of this, but before he react, the henchmen picked him up and took him to one of their nearby "love beds."

Cloud was gently placed on the bed. One of the henchmen, exclaimed, "What have we here!" Cloud hadn't noticed, but his cock was now out and bulging out of his g-string. "The Don will especially like this girl! Haha!" Fear washed over Cloud momentarily, thinking his cover had finally been blown as the henchmen peeled off his g-string, then he felt something press up against his fat, sissy ass.

"Don't mind if I do! Its been ages since we had a "girl" as special as you come through Don's palace! What was the last special "girl's" name, boys? Sephiroth?"

"Man, "she" sucked a meeeeeeeaaaaannnn dick! I nutted down "her" throat at least five times that night!"

"The Don will love you!"

Cloud spent what felt like hours getting stuffed full of their burly, delicious cocks. Cloud had forgotten all about the mission to rescue Tifa and Avalanche in general, all he cared about was making these men feel good.

Suddenly, a knock at the door. "We'll take the third girl now."

The henchmen cleaned Cloud up and put his lingerie and dress back on. "I'm sad to see you go, Cloud!" ::sobs::

"We'll miss you and your fat ass, Cloud!"

"Its okay, boys, after I get done with the Don and his two bimbos, I'll be back. After all, you boys are the Knights of my Round Ass!" 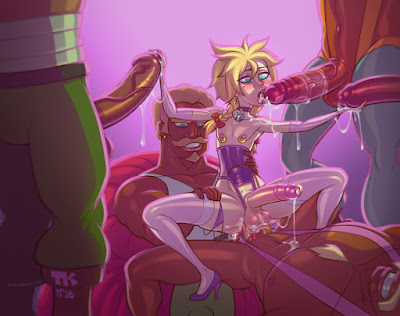 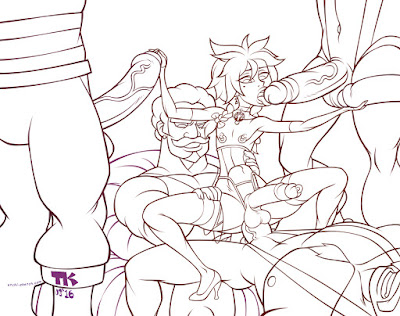